HausHalten e.V.
Like hardly any other German city Leipzig is characterized by its rich architectural heritage which originates from the end of 19th century. Since 1990 approximately 80% of the original buildings dating from this period have been redeveloped ensuring that the architectural heritage of Leipzig's buildings, which are a unique part of its cultural identity are protected against further decay. 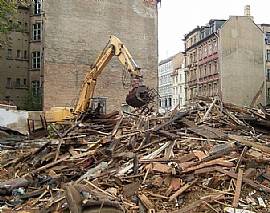 Nevertheless, in the same period Leipzig has lost more than 100,000 inhabitants, of this 50,000 due to Sub-Urbanization, which has had serious consequences for the city's development. Despite recent growth in the population since 2001, approximately 45,000 apartments are still vacant.

In view of the rapidly progressing decay of approximately 2,000 of the existing historic buildings in Leipzig, which threatens some parts of the east and west quarters of the city, it is clear that a new strategy is necessary for managing and rebuilding vacant buildings, in order to preserve and rehabilitate Leipzig's architectural heritage.

The Wächterhäuser scheme
Wächterhäuser which directly translated means House Guardian, is an initiative of the Leipzig HausHalten association. The scheme was set up with the intention of protecting and maintaining existing building. The goal of the association which was founded in 2004, is to ensure the safety and preservation of endangered buildings and the acquisition of new tenants for these buildings on a non-commercial basis.

The background to the initiative is the concentration of listed buildings from the end of the 19th century which are currently empty and are located on major roads and are important for the local urban context.

Due to the large number of vacant houses, classical refurbishment is often very impractical and uneconomic from the view of the owners. For the owners it is very often difficult to find alternative ways of dealing with this problem and this often results in insolvency for the building owners, and the buildings being demolished.

However there is potential in the situation for making use of these premises outside of the usual rental market. This is particularly applicable for creative individuals with alternative lifestyles and living requirements which typical rental conditions cannot accommodate. Such individuals require premises whose conditions are below or different from what typical users would be interested in. Although there is obviously a need for accommodations for such individuals, there is typically very little on the market. Individuals or groups such as this therefore can benefit from the opportunity the housing situation provides. The Households Association views both problems as a chance to unite owners and users in order to solve both problems.

The basic principle of the Wächterhäuser is the provision of houses through usage. The houses occupants become the guards of the house. Their presence helps prevent vandalism, limits weather damage and insures general maintenance. Since general wear and potentially damaging problems are discovered by the occupants early, they are minimized. 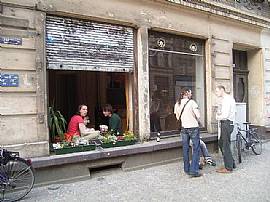 The users take responsibility for the preparation, operating costs and refurbishment of the property. In most cases the owners allow the users to inhabit the flats free of rent. For Haushalten e.V. people who have a special social, cultural, or commercial attraction for these quarters of the town are of special interest as guards for these houses.

"More Area for Less Money" is the goal of the project which also fits the interest of the users. Since there is an abundance of space available users are able to have access to space they would not otherwise be able to afford.

Such users are free to design and refurbish the houses according to their needs and aesthetics. This makes them bring their craft and arts skills to the improvement of the buildings. The labour and maintenance of the apartments and remaining areas of the house become the reimbursement to the owners of the house in lieu of rent.


The owners benefit, by being relieved of the running costs and concern of the day to day maintenance of the house. The owners responsibility rests with arranging for the provision of electrical, heating and water supplies to the houses. In some situations owners are able to secure funds for contribution towards making the house basically usable.

Example: Lützner Straße 30
The first Wächterhaus Lützner Str. 30 is in the so-called MuKo block in Leipzig Lindenau which was selected as a pilot project, because it was highly endangered and important in the urban context. This corner building is listed and had suffered from many years of being empty, as well as the almost complete lack of maintenance. It had significant rot in the timber structure, the roof was breaking and parts of the roof and facade were threatening to collapse onto the sidewalk.

The owners had acquired the house in the middle of the 90's. After some initial negotiations they were convinced to enter into the Wächterhäuser agreement. With funds secured by the Office for Urban Redevelopment and Housing Promotions of the City of Leipzig the roof and the external walls were made secure. Since May 2005 two floors of the house have been converted into studio lofts used by students attending the Academy of Visual Arts in Leipzig.